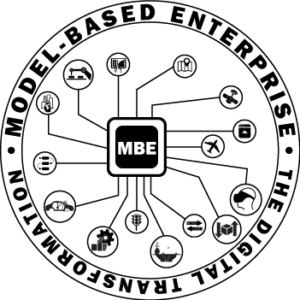 A Conversation with Jennifer Herron following the MBE Summit 2019

After the MBE Summit 2019 that took place at the National Institute of Standards and Technology (NIST) in Gaithersburg, Maryland on April 1-4, 2019, Jennifer Heron, CEO and founder of Action Engineering was interviewed regarding her thoughts on the state and impact of the Model-Based Enterprise (MBE).

Q: Can you provide a little background on this year’s MBE Summit and what it was about?

Jennifer Herron: Every year the goal of the MBE Summit is to identify challenges, research, implementation issues, and lessons learned in design, manufacturing, quality assurance, and sustainment of products and processes where a digital three-dimensional (3D) model of the product serves as the authoritative information source for all activities in a product’s lifecycle. The theme of the MBE Summit 2019 was “Democratizing the Implementation of MBE”.

The model-based community is finally moving beyond the question of “Why is MBE important?” to “How do we deploy MBE?”. This year the 10th MBE Summit was focused on highlighting the history of MBE and real-world implementations of MBE in practice. Papers were presented by academia, government, and industry practitioners.

Q: What expectations did you have going into the Summit?

JH: We looked forward to connecting with existing customers and sharing new ideas and projects that we worked on in 2018.
We always expect a bit of a future perspective of MBE – you know, what might be upcoming on the horizon over the next several years. We also like to find out what software vendors have on their future roadmaps for supporting MBE, and how the vendors best support it today.

Q: How was information presented?

JH: The DOD community – government and commercial alike brought their ideas and projects to share. Sharing this information with others is often tricky due to proprietary and security concerns, so any data shared is always appreciated. We know that companies and individuals have to stop their real work in order to share out these stories, so we thank them for their commitment to the MBE Summit.

Key veteran players in the DOD community, as well as new faces and upcoming contributors attended and presented during the Summit.

Q: Generally, what was the level of MBE knowledge of the typical attendee?

JH: There were many attendees that were checking out MBE for the first time. The NIST ability to offer this event without registration fees is key to MBE adoption because if an organization is in its infancy, and just “checking it out” – then the financial commitment to attend is low. Many government individuals local to the DC-Metro area are able to attend – we thank NIST for supporting this reality of “no travel” for many government MBE contributors.

Q: Did you concur with what was presented at the Summit? Did you disagree with any of the content?

JH: Sometimes I personally struggle with including systems engineering into the Model-Based environment, because our business is so completely focused on the hardware aspects and integration of MBE. However, I get it. We have to look to the future and start working on it.

I am all for connecting system level requirements that are decomposed to a level to control hardware design, but I worry about over-inflating the expectation that system-level requirements can be directly related to hardware geometry generation (think generative design).

But again, if we don’t dream it, then they can’t come, so we still need it. I would just caution that Model-Based Systems Engineering (MBSE) is where we were with hardware MBE 10 years ago (at least at a practitioner level)

Q: What was the most surprising thing you learned at the MBE Summit?

JH: Although this was my 10th year at the MBE Summit, and because we live and breathe Model-Based Definition (MBD) and MBE every day at Action Engineering, it is always surprising when I meet folks that are completely unaware of MBE and its history. But I certainly have empathy for them because I also remember not knowing the story 10 years ago.

Q: To what degree or level was QIF presented?

JH: In a nutshell, it was the “QIF Show” (Quality Information Framework). Because I am on the Digital Metrology Standards Consortium (DMSC) board of directors, I can vouch for the fact that the DMSC really did very little to organize how much QIF was discussed at the MBE Summit – projects showcasing QIF just magically appeared organically. I thought that was really interesting.

Q: Can you share one or two interesting moments that took place during the QIF Round Table conversation?

JH:  The QIF Round Table Abstract inspired attendees; it was heavily attended, and good questions were asked.

For the most part, folks were excited about the opportunities in quality they might leverage from QIF.  Particularly as they gain greater understanding of the power of QIF and its interoperability between all CAD and metrology software.

There were many in the room who have worked the standard for a very long time, but there were also newcomers who enjoyed the overview that the DMSC has honed over the past 3 years. The DMSC is working hard to recruit more QIF participants, inviting those who need 3D metrology and interoperability solutions to check it out.

Q: How does the content presented at the MBE Summit dovetail into Action Engineering and the work that it does?

JH: Well, first and foremost, it’s all we do; we train and educate our clients on Model-Based Enterprise implementation in their workspace. So, we consider this opportunity a great place to share and connect with those interested in MBD and MBE. So not so much a dovetail as much as it is a large puzzle piece that is important to our business.

Q: Specifically, can you discuss some of the key points of Action Engineering’s presentations?

JH: 1. MDB Supply Chain Handoff. Standing room only, people were really interested in the pragmatic and real-world test we ran with an OEM and supplier to discuss and hand-off MBD data with maximum efficiency. We found some tool gaps (but software vendors were happy to work with us), but now we have a fully documented successful case study.

2. Workforce Development (with Purdue University). The MBE community really looks-up to Purdue and Dr. Nate Hartman’s team to help advise organizations and train the upcoming workforce to be MBE practitioners. People are really interested to know what and how they can best train existing and upcoming engineers. Purdue and Action Engineering work together with organizations to help strategize and deliver solutions.

Q: What were some of your major takeaways from the Summit?

JH: The Office of the Secretary of Defense is fully dedicated to Model-Based Systems Engineering. There were multiple presentations, workshops and calls for participation and adherence to upcoming standards. Philomena Zimmerman, Deputy Director, Engineering Tools and Environments at United States Department of Defense, kicked off this “Call to Action”.

JH: Simply, MBE adoption is increasing and expanding. If you aren’t on the MBE train yet, you should be!

Tentatively, next year’s MBE Summit is slated for April 2020 at NIST in Gaithersburg, Maryland.  Check the Action Engineering Event Calendar for the actual 2020 MBE Summit date.