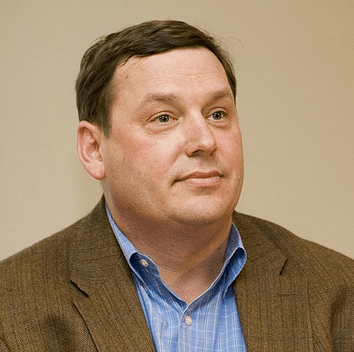 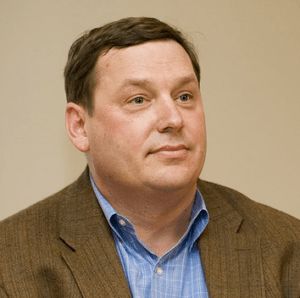 Dave Opsahl is a veteran of the manufacturing and construction software industry. He began his career working for companies such as Boeing and Bechtel in their engineering software organizations. He worked for Computervision Corporation (now part of PTC) for 12 years, starting as a consulting engineer and leaving in 1994 as Regional Director of Sales to become the General Manager of Tecnomatix Quality Engineering (now part of Siemens PLM), where he led a turnaround of the company with new products and profitability. He has worked for several software startups in the manufacturing software market such as Aspect Development (now part of i2), Division/ObjectLogic (now part of PTC), Cardonet (master data management), Adaptive Media (streaming 3D now part of Oracle), and was the CEO of Actify from 2006 to 2011, where he led the company to record levels of sales and profitability. He remains on the Actify board and one of its significant shareholders.

Dave formed a profitable consulting company, Sagemark LLC, which specializes in marketing and business development projects for manufacturing software companies, and was the first Executive Director of the 3DPDF Consortium, an international trade group he founded along with several other industry leaders. In his current role at Tech Soft 3D, the international leader in component software for engineering application developers, Dave has responsibility for all of Tech Soft 3D’s field operations and business development, comprised of a group of approximately 30 professionals who reside in offices in the US, Germany, England, France, and Japan. In addition to his board role at Actify, Dave also serves on the boards of Audible Magic, SmartDisk, and the 3DPDF Consortium.

Dave Opsahl: Tech Soft 3D has been at the forefront of collaboration and interoperability since 1996. Our largest market for HOOPS Visualize is, not surprisingly, visualization which is at the core of any collaboration solution using 3D data. For example, Autodesk’s .dwf format and SolidWorks eDrawings format are both in reality a Tech Soft 3D format called .hsf with some variations for the particular needs of the licensees. When Tech Soft 3D acquired the assets involved with 3DPDF from Adobe in 2010, a large component of that was the technology for converting CAD and industry standard formats into other formats. This became what is now HOOPS Exchange.

In 2013, we acquired Tetra4D, a plugin to Adobe Acrobat Pro based entirely on HOOPS Exchange and HOOPS Publish for converting native 3D CAD data into rich, interactive 3D PDF documents. There are over 10,000 licenses of that plugin in the market today, as well as dozens of licenses of HOOPS Exchange and HOOPS Publish used in other collaboration and interoperability solutions.

We have over 300 licensees of our toolkits powering in excess of 500 applications. Not all of those are related to CAD collaboration and interoperability, but conservatively at least half of them are.

DO: Generally speaking, our Tetra4D line of plugins to Adobe Acrobat are used by small to medium enterprises and in the “edges” of larger organizations where access to a corporate resource isn’t available. Our toolkit partners build applications that address the medium to larger enterprises, depending on their needs. 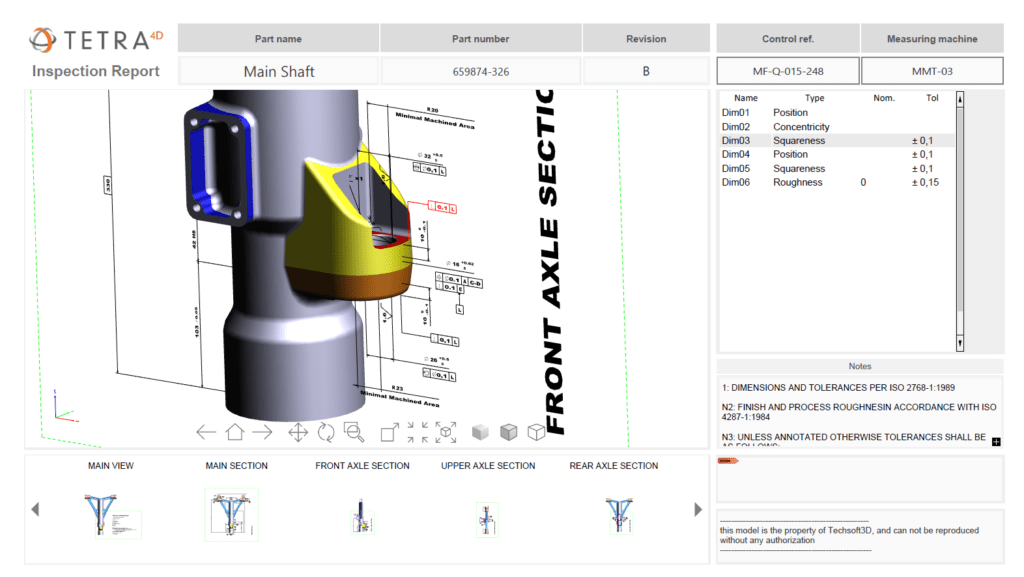 JH: How long has Tech Soft 3D been involved with 3D CIC?

DO: Our toolkits are the entire HOOPS family – Visualize, Exchange, Publish, Communicator, as well as the Tetra4D line of products – Converter, Enrich, Automate, and the Tetra4D mobile readers for a full 3DPDF experience on Android and iOS.

DO: My view is that creating a model-based definition (MBD) is what happens in an “MBD authoring” system. Our visualization technologies (HOOPS Visualize and HOOPS Communicator) both can author data under the control of an application and fully support concepts like associated annotations (for instance, the visual response requirement from ASME 14.41), saved views, semantic product and manufacturing information (PMI), and so forth. On the other hand, one could argue that if an MBD dataset has to move from one format to another, say from CATIA or PTC to STEP AP242, then HOOPS Exchange fully supports the same concepts of associated annotations, saved views or captures, and semantic PMI. There is a third variation on this theme when the MBD authoring application scope includes publishing of 3DPDF or HTML. In this case, those concepts are also supported by HOOPS Publish, but rather than playing a direct role in creating the MBD dataset, it is capturing the full representation of those concepts in the publishing workflow. In the case of the SolidWorks MBD product, they used HOOPS Publish, but we also provided services and that expertise contributed to fundamental ways in which the SolidWorks MBD product was implemented. 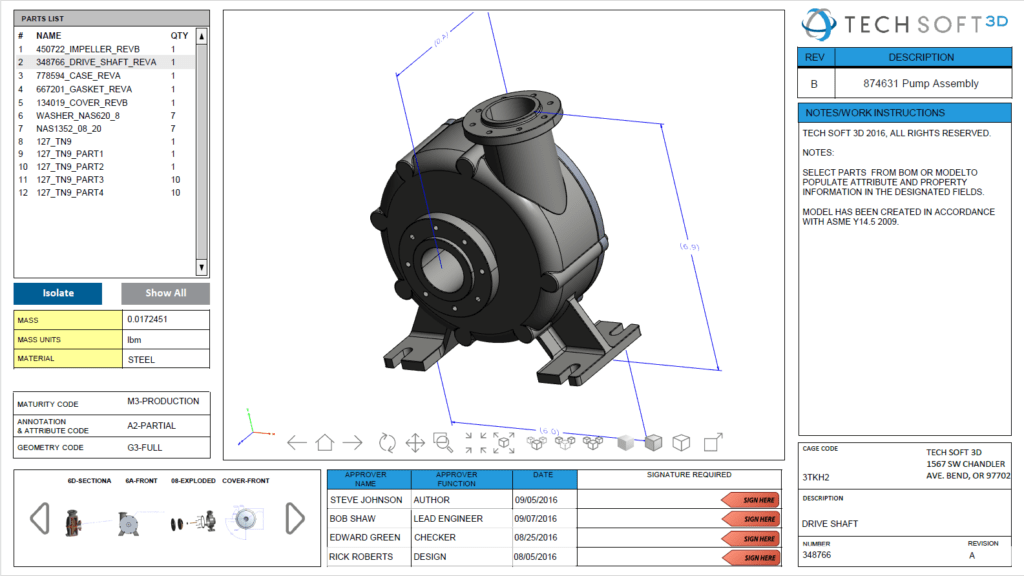 DO: All of our technologies scale well across all three categories. HOOPS Communicator, for instance, can accommodate any size and complexity of component or assembly, including the industry standard Boeing 777 full model benchmark. HOOPS Exchange can process data faster than any competitive toolkit on the market. The truth is that scaling depends more on the architecture of the application into which our components are integrated, rather than the components themselves.

JH: How do your products help companies with their MBE journey?

DO: For application developers, our toolkits are really more about enabling MBE capabilities than MBD capabilities. Being able to visualize MBD data, to be able to transmit MBD datasets from one to another without a loss of fidelity, or to publish rich, interactive user experiences in the form of 3DPDF or HTML is what our components are all about.

If we think of MBD as the set of features within an application that allows for the creation of a “truly perfect” fully constrained and annotated 3D design, that is something that is a function of the data model and the intellectual property of the application developer. If we think of MBE as taking that MBD dataset and “communicating” that in the context of other workflows (e.g., MRO, QA, ME), then our toolkits are more often used in that context. For example, all of the 3DPDF technology we have and deliver is about MBE, not MBD. With that said, we do have CAD developers that use our toolkits as part of design applications, but MBD per se is but one set of workflows in the design process.

DO: If by Digital Manufacturing you mean driving the manufacturing processes, here again we have a very large number of different application developers who are performing a variety of manufacturing functions. Some are interested in driving tool paths, others in performing quality assurance workflows, while still others are interested in supporting additive manufacturing workflows. In every case, the ability to visualize the data in the context of the workflow; to be able to represent accurately the elements of the dataset that matter to those workflows such as associated annotations, saved views, or semantic PMI; or the ability to maintain that fidelity when publishing the results of a manufacturing workflow such as first article inspection; are essential. We fully support all of those workflows and the applications used for Digital Manufacturing.

JH: How does Tech Soft 3D support Autodesk in their efforts toward moving into the future of Digital Manufacturing?

DO: All of our products are available to Autodesk, and there is Tech Soft 3D technology in several Autodesk products. We also provide technology to solution providers who are helping Autodesk customers move forward on their own individual MBE journeys.