Dr. Martin Hardwick of Rensselaer Polytechnic Institute will present at the 2017 Quality Information Framework (QIF) Symposium. The 3D Collaboration & Interoperability Congress (3D CIC) and the QIF Symposium will be held in Golden, Colorado on October 3-5, 2017. 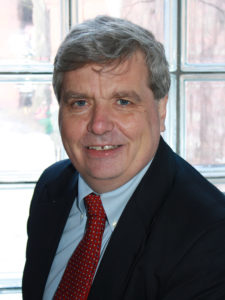 Weaving a Digital Thread for Manufacturing: STEP, QIF, and MTConnect

Sending models to manufacturing machines enables intelligent software to adapt solutions for current resources and configurations. Multiple attempts have been made to enable this by developing inter-operable standards starting with BCL in the 1970s. Originally, we were frustrated by low compute power. This prevented the simulation and verification necessary to adapt the models. Now, we are frustrated by the requirement to define inputs and outputs for both CNC and CMM machines. Recently, two DMDII projects have shown that this frustration can be eliminated using federated standards in a digital thread.

The three standards use different technologies to solve different problems:

As a specialist in data semantics for engineering applications, Dr. Martin Hardwick has supervised ten Ph.D. and numerous Masters students. Dr. Hardwick joined RPI in 1989 as an Assistant Professor and has risen through the ranks to be a tenured Full Professor with more than 60 referred papers. He has won several NSF grants, was a principle investigator for the DARPA Initiative in Concurrent Engineering project, the National Industrial Information Infrastructure Protocols (NIIIP) project and the NIST ATP Model Driven Intelligent Control of Manufacturing project. He participated in the DARPA Advanced Vehicle Make (AVM) program and he is the leader for two DMDII projects. Currently he is the convener for the ISO working group on Digital Manufacturing (WG15) within the industrial data sub-committee (TC184/SC4). Software for STEP translation written by Dr. Hardwick is included in the libraries of many CAD and CAM systems. In 1991, he founded STEP Tools, Inc. with his graduate students. He received his bachelors and doctorate degrees from Bristol University in the UK.