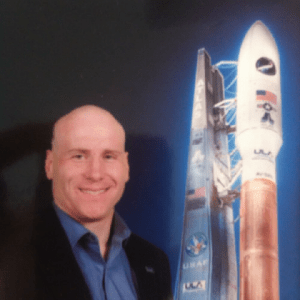 The use of Model-Based Definition/MBD rather than heritage 2D drawings plays an important role in enabling innovation at ULA, however transitioning “records of authority” from 2D drawings to 3D models has presented challenges. ULA bridges the gap between the 2D and 3D world with 3D PDFs, however the comfort and simplicity of paper is hard to forget.

Casey Nordwald has been designing rockets for 16 years. After completing his Mechanical Engineering Bachelor’s Degree at the University of Missouri-Rolla (now Missouri S&T), he began his aerospace career at Lockheed Martin in 2003 as a Centaur Structures Designer. Casey completed his Space Systems Operations Master’s Degree from Webster University in 2007. He then transitioned to Atlas V Booster Structures, assuming the Design Lead and CRE roles soon after. Atlas Booster Tank fabrication transitioned from the heritage Denver, CO factory to the Decatur, AL factory in 2010 following United Launch Alliance’s creation in 2006. Casey began working with the team developing early concepts and designs for the booster that would eventually become Vulcan in 2013. His role on Vulcan expanded steadily to his current position as Vulcan Booster Tank Structures Design Lead and CRE. Casey is excited to be a part of the team designing ULA’s next great rocket!

The 3D Collaboration & Interoperability Congress (3D CIC) focuses on 3D CAD collaboration and interoperability for the entire product lifecycle. The 2019 theme of Trust Digital showcasing organizations that have evolved to trusting digital: tracking their product’s condition digitally at each stage of the product lifecycle. 3D CIC 2019 will be held October 7-11, 2019 at the Buffalo Rose Events Center in Golden, Colorado. Find out more and register at 3dcic.com.