PMI is Product Manufacturing Information. In ASME Y14.41 language this means the annotations and attributes contained in a 3D solid model that compliment the geometric definition and complete the digital data set. PMI is a critical data component of a 3D solid model that enables Model-Based Engineering (MBE).

The process and artifact of applying PMI to a 3D solid CAD model is Model-Based Definition (MBD). 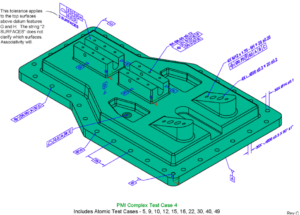 The National Institute for Standards and Technology (NIST) reveals interesting data from their project “PMI Validation and Conformance Testing for Model-based Engineering”.

In the NIST presentation for the Systems Engineering Conference in Washington DC (SEDC) on April 3, 2014, the concept of SEMANTIC PMI is introduced and researched. This work complies with both ASME Y14.5-1994 – Dimensioning and Tolerancing, and ASME Y14.41-2003 – Digital Product Data Definition Practices standards.

Semantic PMI: Annotations and attributes that are associated with a 3D solid model and its geometry features, is software interpretable, and can be displayed for human interpretation.